European Space Camp 2018 saw inspiring lectures from some of the world’s top scientists and engineers, practical rocket work, a koselig bonfire at the beach and the launch of Alv I, named after renowned Northern Lights physicist and Space Camp favourite Alv Egeland.

“Being able to participate at European Space Camp opened my eyes to new directions in life, and it’s an experience I will never forget.” 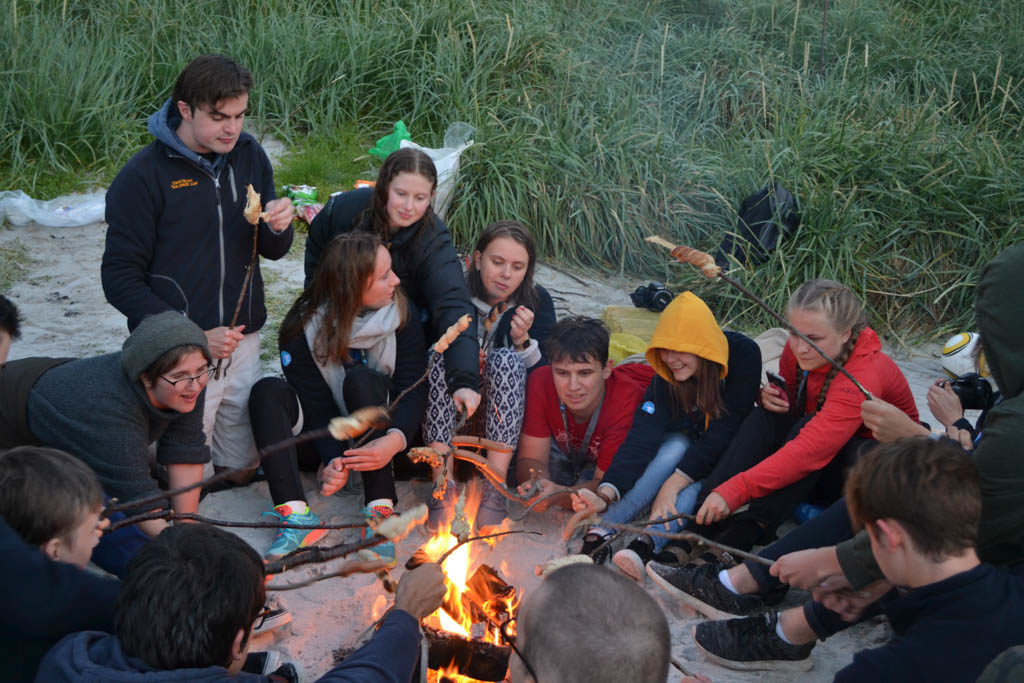 Agne, Anders, Andrea
Today we arrived at Andenes Airport to attend European Space Camp. When we came to
the space center we were lovingly welcomed by the Team with Gaute in front. In the
living room there were other participants that had arrived earlier. The atmosphere was
fantastic and we were quickly integrated in the group in a non-awkward way. In the
living room we got to know each other and played cards. At half past four we had lunch,
and Gaute only talked about how big sandwich he can make, and how not to get soggy
bread.
After lunch we were welcomed by Tine Joramo from NAROM in the auditaurium. Later
we went back to the living room to play games and get to know each other. One of the
games was about drawing a partner with your non-dominant hand, which became our
door signs. At the end we got some super nice jumpers from the Team, and took a story
for the Instagram (S/O to @europeanspacecamp).
Then we had pizza, it was nice. Good pizza.
First impressions of ESC is that this is going to be an amazing week with a lot of
motivated and enthusiastic people.
Something great at ESC is that we always have to speak English, even though at this
particular moment, we are three Norwegians sitting alone and only speaking English.

Today we woke up to the second day of space camp, jumping straight into the annual
camp exercises. Parliamentarian, Roy Steffensen, officially opened the camp, which was
then followed by an eye-opening tour of the facilities here at Andøya Space Center.
Experiencing the history, launch systems and developed better relationships with fellow
space campers.
After being exposed to the different aspects of a rocket campaign we were then able to
select which area of the program that we would prefer to work with, being able to select
from the Payload, Sensors, GPS and Telemetry. We got straight to work, getting our
hands dirty and beginning to understand the basic principles involved in a rocket
launch. We began to master the art of soldering as we started to piece together the
components of the rocket.
As it is Friday today, we, in true Norwegian fashion, devoured a multitude of tacos.
Straight away we had to fetch our gear for the upcoming mountain hike to the ALOMAR
observatory. After recovering from the monstrous climb the breath we had left was
taken away by the picturesque view of Andøya Island. We got to explore the observatory
with super powerful and dangerous lasers and enjoyed it very much.
Two hours of hiking later we were back at the space center and ended the day with an
engineering competition in true space camp fashion. Topping of the day by designing a
device which could dip a ping pong ball multiple times. At the moment we are finishing
up our diary watching the beautiful sunset.

We started the day with a fun ball game called 10-passes to wake up. Later that day we split up into three groups. The different activities were the Aurora Space Mission (Rocket Mission Simulator), watching a video about the northern lights and its history as well as a quiz to test if we already learned something. Which were all interesting, fun and educational especially the Aurora Mission was challenging and helped build up our team spirit.

Christoffer Stausland grabbed everyone’s attention when he hit the subject of the physics behind rockets. It was so interesting that he didn’t finish his lecture since we asked so many questions.

After recharging with lunch we continued our work on the rocket enthusiastically. We soldered the last sensor units and decided on where to place the payload and others continued on the balloon. The balloon is going to test the conditions.

in the evening we had an engineering challenge where we had to prevent a water balloon from being destroyed after being dropped from various heights by using different household items. There were some creative ideas, but Gaute’s backstory for the setup was the most creative.

After dinner people went either to the store or in the cold ocean and afterwards in the sauna. A nice ending to a good day.

The day started unusually with an inside morning activity, because the weather was just too bad. After a fun time of Hi-Ha-Ho and the usual breakfast we continued our work at the rocket and the balloons. After that, we listened to many lectures. Two of them were given by the famous researcher Alv Egeland about the Northern Lights and Space radiation.

During the last lecture we not only created clouds in bottles, but also saw a piece of the original solar panel from the Hubble telescope which was retrieved during service mission in 2001 as we were addressing the topic of life on the Mars.

During the end of the lecture we built some small rockets using only paper and tape. They were launched with pressurized air at 45 degree angle and with 6 bars of pressure. The one with the best design flew well over 100 meters!

After finishing our small rocket launches just in time, we went to Andenes for a fancy dinner in the local restaurant.

However, besides incredible rocket launches and lectures from a prestigious scientist, the real highlight was the evening activity. Our task was to come up with a small dance show in groups of five. Everyone designed very unique and impressing shows, even though we were only given about 40 minutes. The last performance belonged to Team Space Camp, which was simply fabulous.

KABOOM! This is not how our hybrid rocket motor demonstration went. Instead, our day was filled with other far more exciting, explosive, and enthusiastic activities, such as chain tag in the morning, GPS treasure hunt, and our first balloon launch. After launching our balloon –km into the sky, the Telemetry team were able to interpret the data, as well as test the sensors. Meanwhile, the rest of the teams worked together on completing the Payload, sensors, and equations for the rocket – later named ‘Alv 1’. Following this, we were able to listen to Konsberg representative, Solveig Aarø Andvig, discuss the search for the unknown, and the way in which our curiosity can stimulate technological and space advancements. Pål Brekke introduced Norway’s involvement in space, with particular reference to solar exploration, aurora, and the recently launched Parker Solar Probe. He then talked about the “Stormy sun” and how it affects our society. These talks were very interesting and were a great window into the way in which our passion for space can lead to real-life applications and future careers.

Aliens. They were the next topic. Sophie Cottis-Allan talked about astrobiology and extremophiles’ role in our understanding of possible life outside of earth on moons/planets such as Titan, Europa and Venus. She then inspired us further about the James Webb telescope and how it will use infrared cameras to see through nebulae and view the birth of stars, as well as seeing infrared light from “invisible” celestial objects that has had light reflected off of them red shifted into infrared where we cannot view them. We are excited to launch the rocket tomorrow.

We apologise for the late arrival of flight “Alv I” to the ESC 2018 diary…
Jokes aside, today was most likely the most intense day of the week so far. Before we got to the rocket launch we had to go through quite a bit of preparation. Final assembly had to be finished up by the NAROM team the day before, but now the rocket was all in one piece and ready to go. Before even getting to our stations we went through the pre flight meeting and safety brief, in which we had to go through the huge number of checks in the countdown procedure. After the meeting we split up into our corresponding groups, with Annik, Mateusz, Gabriel and Piotr heading down to the blockhouse as our Payload Team and Pad Supervisor. Their task was to put the rocket on the launcher, prepare the payload, arm it and then launch the rocket. Meanwhile telemetry team were preparing to read in the data both from our small horn antenna manually tracked from the NAROM Lab and read in the data from the Andoya Space Center main antenna. This whole process was managed from the control tower where Anne was our range control, directing the entire operation. The entire countdown took an hour after which the exhilarating takeoff took place and as far as could be seen the flight went perfectly. It lifted off into the sky (with a noticeable delay in the sound shockwave) and disappeared into the clouds, and landed after around 90 seconds in flight.

The next step was analyzing our data. As it turned out we had a few sensor failures. The GPS failed to connect to any satellites and we lost a vital part of our measurements, as well as the IMU accelerometer and gyroscope dying after 7 seconds of flight. Nonetheless we could supplant most of this with information from other sensors, calculating altitude from the pressure, and using our second analog vertical accelerometer for speed. All this would be presented the next day.

But to end this most exciting of tuesdays we had a very exciting evening. It started with the official arctic ocean swim with many brave souls throwing themselves into the frigid water. After drying off as quickly as possible we warmed ourselves around a bonfire, on which we roasted marshmallows, cooked sausages, and made some norwegian pinnebrød!

Do we really have to leave? Really?
Our day started with us presenting data from our rocket and ended with us presenting our favourite memories. We had our final lecture today on 42 and the answer to life, the universe and everything (Yes, it is really complicated). We ate waffles and had an Official Closing Ceremony (They really try to confuse our feelings by feeding us waffles and then making us sad). Our talk on the sponsors was cut short by an emergency call to Nina. Turns out Sophie needed her help at the ISS. At the final show we all laughed and cried and laughed till we cried. At the very end we found out that Sophie and Nina found the sauce and an international emergency was avoided.
We ended the night by watching a slideshow of everything we have done here. It doesn’t seem like anyone is ready to leave this place. Luckily we still have tonight.