The 24th European Space Camp was lucky enough to have Russian Cosmonaut Andrey Borisenko on visit again! There were participants from 8 different nationalities this year, including China and Italy. During camp, NAROM was in the middle of building their new visiting center and office building. Despite this, we were able to do everything as planned and have a successful launch at the end of the week!

Two particiapants in the sun set/rise 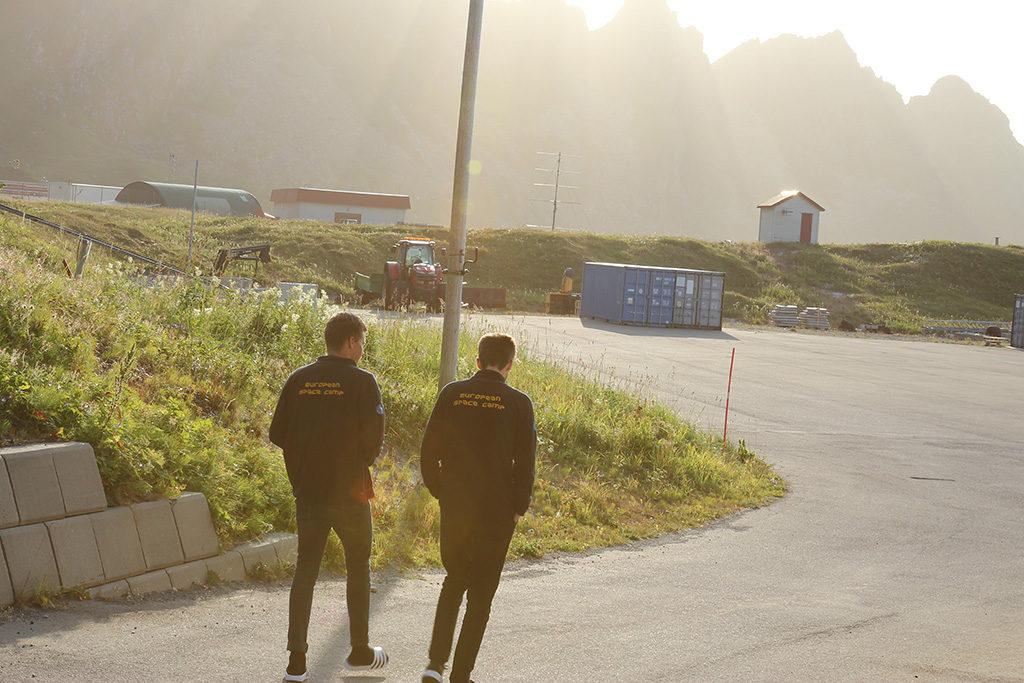 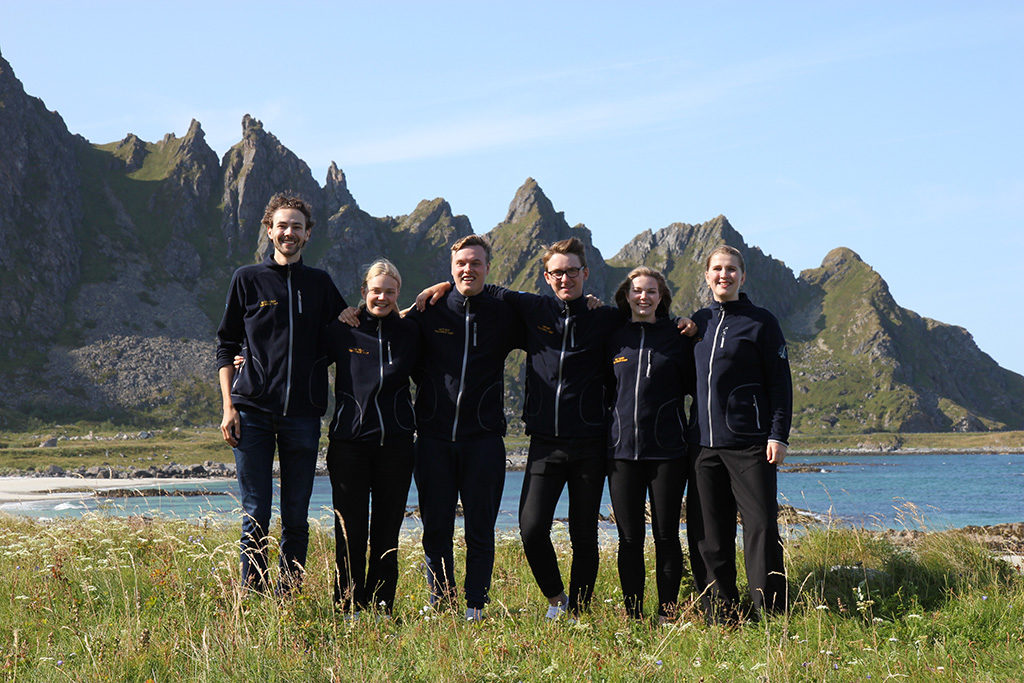 Today, we arrived at Space Camp! We arrived quite early and took a tour of the Andøya Space Center after checking into our rooms. We got a view of the beach and it was amazing. Then, we played card games for most of the day and got to know the people here. While we were waiting for everyone to arrive, we played board games, Ninja, and “Lupus in fabula”. After everyone got here, we had lunch and gathered for the opening ceremony. We heard from the mayor and a member of parliament and officially started our journey here at Space Camp. Afterward, we had several lectures on the final project (the rocket launch!) and the different areas of responsibilities were introduced (including payload, sensors, and telemetry). All of those tasks sound exciting and intriguing, and we are looking forward to choosing our areas tomorrow! After dinner, we finally got time to sit down together and (actually) learn everyone’s names (that took a while). It was really fun to play icebreaker games and get to know each other’s hobbies. Even though everyone is tired from a day of traveling and (a lot of) new information, we can’t wait to have a good time here learning STEM and building our rocket! (Excited for the hike tomorrow to ALOMAR XD) peace out

Our first full day here at Andøya space center began early and with some very exhausting exercise (a short morning training to wake us up properly). After breakfast we were given a tour of the space center and all of the facilities we are going to make use of in the next few days. The tour was meant to help us decide what roles we wanted to take up, with the three main groups being Sensor Experiments, Payload and Telemetry. We got to see loads of cool equipment and devices.

We ranked which roles we wanted to be assigned to and while that was being decided, we attended a lecture on “Space Electronics: Applications and Technologies” where Grude Joheim from Kongsberg told us about some of the satellite electronics that they make and what they are useful for. He was also there to inspire and give an insight to the space industry. The SAW (Surface Acoustic Wave) was particularly interesting!

After lunch and some more “Space Electronics: Applications and Technologies”, our positions were announced and we finally got to start work on the rocket that we are launching next week. The majority of us spent time soldering, programming and testing out sensors, and the payload group named their sensor and circuit boards! The telemetry group was preparing their own mysterious project in the other building…

Once the day’s work was done and dinner was eaten, we were rounded up into some vans and deposited at the the foot of a small mountain and told to climb it. Cold weather, bone-chilling wind, poor visibility from inside of clouds, and worst of all, sheep, failed to stop us and we made it to ALOMAR at the top of mountain for another interesting tour.

Whilst most of the group took a nice, long walk home from the mountain, the three of us writing this diary entry got to take the car home to make time for the writing. An excellent way to end our day!

We started our day with a very fun but also strict astronaut training, in which we “walked” in zero gravity and stood still doing all the crazy things Gaute told us to do. After breakfast we all met for morning meeting to discuss our progress with the rocket, so that we able to continue it: the sensors team was all busy working on PCBs and tested them, while the payload team had a very nice time wiring everything up and giving all sensors a weird name.
Before lunchtime we watched a movie by Spaceship Aurora about Northern Lights and we enjoyed it a lot. Later we continued talking about Aurora Borealis with the physicist Alv Egeland, who showed us all the beautiful reactions that make Northern Lights so wonderful. He also made us listen to some “Aurora music”. Then the NAROM teacher Christoffer Strausland held a lecture about the different kinds of rocket engines and how they work, like the forces which act on them and the kind of fuel they use. We also watched a videos of the Soyuz rocket that drives astronauts on the ISS, such as the cosmonaut Andrei Borisenko. Feeling full after dinner we got the wonderful opportunity to meet him, so we all got excited because he is going to stay at Space Camp with us for the next three days. Even though we were all amazed enough by the words of the cosmonaut, we got a super important message from Inge, who told us that some aliens sprayed “Humanity sucks” on the surface of the Moon! Therefore, we had the important task of building a small prototype of a Moon lander able to carry some paint on the Moon to cover that text. They gave us a balloon filled with water (our paint), and a kit with some extremely (un)useful items, with which we had some difficulties completing our mission. Launching these prototypes was really fun, even though almost everyone of them got destroyed! The teams which were lucky enough to survive the deadly fall were given some snacks called Smash.
Our Moon experience continued later, when Sophie from the UK brought us a Moon rock: looking at it and touching it was very cool!
Since fun never stops here at Space Camp, and since some of us died during out weeklong murdering game, Anders added some crazy and messy rules to it, so we are all waiting for ghost cards to be hidden tonight!

Today we started off early with chain tag, followed by a traditional Andøya Space Centre breakfast. Afterwards Christoffer walked us through the basics of MATLAB the software which we will use to generate graphs from the data we will collect from our weather balloons and our rocket.
Worked on the rocket under the supervision of Cosmonaut Andrey Borisenko, also we fixed our temperature sensor known as Johnny (we name all our circuits for reference 😉). At 12:17pm we released our first weather balloon (called Gagarin) reaching an altitude of 29.9km, a height successfully estimated by Anna.
Sophie Allan, who is super cool, showed us an actual piece of the Hubble Space Telescope’s solar array and demonstrated the heat shield of an actual Russian Buran shuttle with a gas torch during her lecture about Mars.
We had waffles with jam and brown cheese, a Norwegian delicacy. Followed by a guided tour of the Andenes whale museum. Finishing a wonderful day off with a beautifully hilarious dance competition. We had a blast but there’ll be a bigger one on Tuesday. 😉😊

Today we finally finished the rocket!! Every sensor has been done and tested. We named the rocket “Space Shipriani IV” and wrote the name on the rocket. We also singed it so that whoever finds it in the ocean will know who made it. After a short meal we had a Q&A session where the best question got a small little price. After lunch we had a what this writer would call the “a lecture marathon”. With four lectures in total the first one was about norwegian space activities followed by how a day would be without the satellites. then the director of operations of the sight thought us about how it is to work in an operative rocket range. Last and final lecture was about balloons and the different types of them. Cosmonaut Andrey Borisenko visited today!! First he showed us pictures and exclusive videos from his space travels. It was really exciting! We got to ask him loads of questions, like how reentering the atmosphere feels like and everyday life in space. They made it a competition where the best question won prices. They got little lights with spaceships that Andrey had signed. Later we had a “Social Cosmonaut time” were we all took pictures with Andrei and a signed picture or a badge from his travels to space. At the end of the day we were sent on a GPS-hunt to prove that humans don’t suck.

WE LAUNCHED THE ROCKET!!!!!!!!!
But just like every day before breakfast we had to start with some morning exercise – today in form of a relay. After an informative morning gettogether, the pre-flight meeting and safety brief started – the last steps leading up to the launch! Then, everybody got into position for the final countdown. 10, 9, 8, 7, 6, 5, 4, 3, 2, 1…. In a spectacular fashion our rocket shot into the clouds leaving us extremely excited on the ground! We made tons of photos and even cosmonaut Andrei Borisenko joined our celebration. After the post-flight meeting, we started the evaluation of the data our rocket collected. Later that night we had the honour to listen to Sophie Alan once more, delivering an interactive lecture which included blow torches, infrared cameras and a super-isolating thing. Another highlight was Marco (one of our participants) talking about astrophotography and his self-made telescope, leaving us all so amazed that we needed to cool down our excitement in the arctic ocean, only to warm up again with a bonfire, stick bread and marshmallows. We stayed up all night playing midnight volleyball, swing dancing and other creative games – perfectly wrapping up the unforgettable launch day.

The last day of the space camp started with a late breakfast as a result of the bonfire the day before. After breakfast we made the finishing touches on our presentations, followed up by a particle lecture by Alexander Biebricher and lunch. Then the time for presentations had arrived. We got the opportunity have a look at the results from the different parts of the operation. Then we had waffles followed by the official closing of European Space Camp 2019 hosted by the head of NAROM. We rounded up the day with the shows every group had prepared, including everything from performances to games, but what really took our breaths away was the Team Space Camp song and the photosession afterwards. It all ended with leaving some messages from heart to each other.