European Space Camp 2022 is about seeing inspiring lectures from some of the world’s top scientists and engineers, practical rocket work and lots of other fun activities. 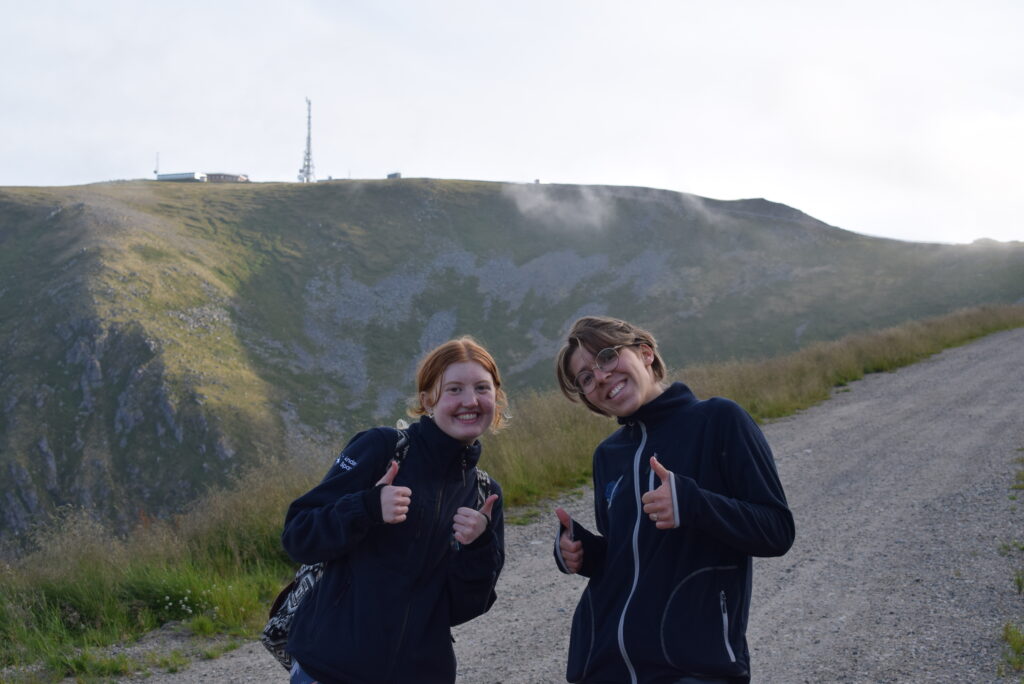 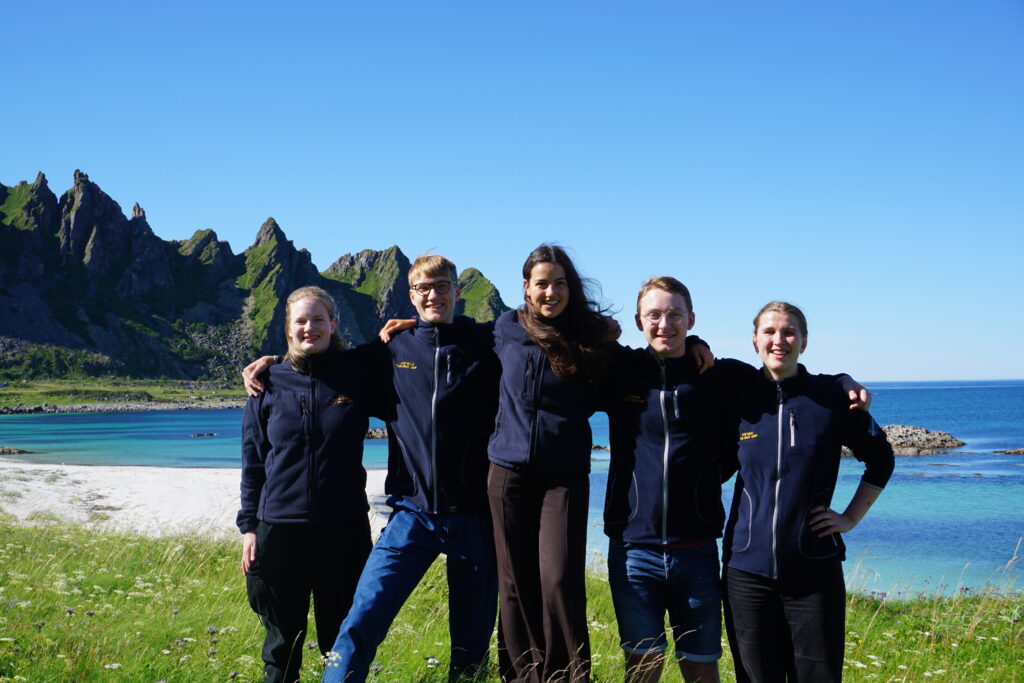 Waking up early with a lot of people is a good and new experience. We couldn’t wait to start a fresh new day of learning about Rockets as well as starting with the hands on aspect. We started the day with a morning gym making patterns on the ground with our bodies. It was fun co-operation activity. After breakfast we had the opening ceremony with the mayor of Andøya and a Norwegian parliament member as well as the traditional ribbon cutting. We were then given a tour of the facilities and we were impressed to see how big and interesting all the hardware and infrastructure is. We then had a first round of presentations from lecturers on Space environment and NorSat. After lunch we had a presentation on Andøya and the future of the complex. We were then divided into groups and given our responsibilities. For about an hour we started working on the hardware (sensors, telemetry, payload). We ate dinner and then headed out on a hike up on the mountain behind the launch complex, where we saw some amazing views but unfortunately we weren’t able to visit the laser observatory. We returned to home base and then took a dip in the artic ocean and played volleyball. We finished the day with a final meal. Now everybody is all stressed out because of the killer game that has just started, it will be interesting to see how many remain tomorrow.
Overall it has been a hectic but fun day with a lot to take in and to learn. It feels like we have already been at ESC for a week, so the rest of the camp looks really promising. We get to know each other better. Hiking on the first day was a good idea. It was fun and interesting to be able to talk to all the participants during the whole day and learn about the multitude of European countries represented here at ESC.
Matias, Marcus and Zeliha

It was a nice morning until we got outside for morning activities. When we stepped outside, it was raining and we got in astronaut training positions. We had to wait for some tardies in plank position and then run around the whole building and finishing it all with 10 pushups.
We headed our way to the lab to continue our work with the rocket. Telemetry were kinda isolated from sensor experiment and payload which was basically in the end working together on the rocket placing the sensors. So we were basically done with our sensors in the end and many groups were starting working more on their cases.
After lunch we got a lecture by legendary Alv Egeland who were teaching us about the aurora lights, the history and the physics.
After dinner we got an hour of freetime which also was a productive hour because we got fully rested before our next lecture which was given by Jan Erik Rønningen. He was talking about rocket science. He explained, among other things, the physics behind different types of rockets.
When the lecture ended we headed our way to the living room where the camp team had a surprise activity for us, which turned out to be dancing. We got splitted into groups and got 20 minutes to be creative and make our own dance for the following songs:
– Its raining men
– Hips dont lie
– Fairytale
– You’re the one
– Rocket style
Utmost impressive moves were shown.
Johanne, Furkan, Boss, Mikołaj

Today started the same way as yesterday: we were late. Consequnece: two minutes of nice planking which actually helped us to wake up. Afterwards a good session of space yoga brought some peace into our souls.
After breakfast the whole nerds team went to the laboratory for the last intense rocket work session… I (Daniel) and Arvids completed the temperature array sensor and we were pretty satisfied about it but also pretty stressed about the last delicate operation which was gluing it into the nose of the rocket within 5 minutes of time. After putting all sensors in the rocket, we tested payload, cooperating with the telemetry team which received signals from our rocket. We had to resolder some sensors and change a transmitter module.
We (Milena and Kristin) have been working on the weather balloon which we were able to release after lunch. Before we did that we decorated the Styrofoam box with funny space related drawings from the whole team. The balloon went up almost 13km before we lost the signal. We sat at the beach with a big antenna for 1.5 hours following the balloon… pretty cool I would say!
Let’s skip to the evening highlight… we simply had the most interesting and craetive GPS hunt one can imagine… the different posts stimulated our brain pretty much: we had to create a space ad, an album cover with random objects and launch a water rocket… in the end we were for one hour in the classroom trying to decode an undecodable message and that defeated the last heroic brain cells that had survived the whole day… which was kind of bad since after that we also had an engineering contest which for some of us turned into an acrobatic team workout to compensate how bad the engineering part was.
In the end all our work was coming together and we managed to complete the whole rocket, sign it, draw some cute eyes on its nose and even a smile 😊 Then we had a long picture moment after which we started realizing that we actually just signed a rocket that was going to be launched in the atmosphere (hopefully (spoiler alert)).
Daniel, Kristin, Milena, Marek

Dear diary. Today was launch day, and the total plank time in the morning was just 1 minute. So things were looking up. After breakfast we all traversed to our classroom for a lecture in space electronics, specifically made by the company Kongsberg. Their electronics included mostly communicational ones, and they were worth more than us per kilo. Then we had a pre-launch safety briefing where he talked about safety stuff. Everyone had to be at the pre-launch meeting, but we were surprised to see that “everyone” included approximately 20 more people that spawned out of nowhere.
Lecture running late as always, we ran to get lunch. Stressed, hyped, nervous and giddy, we inhaled our lunch as fast as we could before the launch. Minus some of the sensor group.

Some of us went over to our stations and got ready to initiate the countdown, others had no other purpose than rocket watching. Sadly, there were no rockets flying on this day. Their chosen view instead were the toilet doors in the corridor, so that they could properly hear the countdown over the speakers. Sometimes, the impatient ones strolled over to student telemetry to hear what was up. Short answer; our pulses. It increased exponentially with the activity over the telecom. In not long, it was announced T-10 seconds. 9. 8. 7. 6. 5 — HOLD, HOLD, HOLD, HOLD!!! There turned out to be several problems, with great timing. First one being an incoming ambulance helicopter over the launch area. Second one a ship, and third was a payload data error. Which is yet to be fixed. Hopefully by the launch window tomorrow. Even though the launch was slightly disappointing, the rest of the evening was not. We tried Spaceship Aurora, an interactive VR adventure; We made paper rockets, robbed the reception lady of free merch. Lastly we ended the hectic day with ruleless volleyball, speed swimming, and a hot hot sauna. Muy fun :)
Malin, Robert, Emilia

Today, because it was raining, we did morning yoga instead. After breakfast we had an awesome lecture by Sophie Allan on the topic of Mars and Mars exploration, which included a hands-on experiment, where we boiled water with a syringe and our bare hands. We also did an experiment on marshmallows showing how pressure would affect astronauts on Mars. After lunch we went over the safety briefing once again and went to our positions to prepare for launch. Today the pre-launch procedures went much smoother due to us having run through the routine before. We were ahead of schedule and with the skies clear we were ready for launch. The launch was absolutely successful, the rocket reached heights higher than Mt.Everest and speeds over 550m/s. The Telemetry team ran in to look at the live results, which was definitely exciting.

After launch all the groups met in the Andoya Space center building and celebrated the successful launch of Aurora Ballerina Breaker. Using the Python programming language, we used a script to process the collected data, with the main project focusing on various ways of measuring the altitude of the rocket. After hours of crunching data we had a nice BBQ party in the super cool BBQ hut near the oceanside, with a rainbow over the ocean at the same time as a congratulation from the sky. After more hours of data analysis, we had a small and fun paper rocket engineering competition, with the winning rockets flying over 90 meters! Then there was a cool demonstration of rocket power and fuel using a water jug and isopropyl alcohol, creating a giant and nice flame. Soon we’ll be heading over to roast marshmallows over a fire with a view of the ocean to watch the sun rise.
Leanda, Sofia, Arvids

Today we began with morning gym, and as always there were some people who arrived late.
After breakfast we finalized our presentations and then each group presented their work. We
were very comfortable with our presentations and it was really nice to see and compare
everyone’s work. After a short break we had some really interesting lectures from Sophie
about space telescopes and more specifically the James Webb Telescope. Sophie shared her
excitement with us and we truly understood the sheer engineering complexity. The highlight
of the lecture surprised all of us – Sophie offered to touch the Hubble Space Telescope and
she was not joking. She showed us (and allowed to touch) a solar panel that has been
removed from it during a servicing mission. The panel was covered in micro meteorite
impacts…
Then we had a very delicious lunch and spent some great moments with each other. All of
the participants had presentations about the sponsors of the ESC. They were very good at
explaining what they did before and during the space camp. All of this was a great reminder
of how grateful we are to be in this camp. After that, we had the closing dinner, which was
more formal than usual and we sat along a big table all together and had our dinner.
After Panders news and a good talk by the dinner table, the Camp was officially closed. Anna
surprised us by showing the trailer of the after movie she made, summing up the highlights
of all these days we spent here, and the ESC Show could finally start. We had amazing
performances by both the participants and the ESC team. The team actually sang a parody
of the song `I want it that way`, but remixed for the lovely space camp nerds.
Marks, Achilleas, Necib